Qubes-OS has an amazing feature called “Split-SSH” [1] and “Split-GPG” [2]. The short version of how this works is that we have a virtual machine that acts as a gatekeeper of sorts for secrets. Using the above, we could store ssh keys securely and use it for authentication, or gpg keys securely and use them for encryption/decryption/signing/etc.

What helps make this secure is a separation between your main workspace, and the SSH or GPG secret. You receive a prompt within dom0 to allow access, and can protect it via a further secret/pin/etc. Since dom0 is assumed to be secure in any Qubes install, any security issue in a specific qube should be isolated from the qube holding the secrets. Furthermore, the qube holding the secrets is “offline” all the time, and holds minimal running software just for this purpose and isn’t used for anything other than dealing with the secrets.

The guides linked in the first two references are the official guides for setting up both. Where the guides are limited in is if we want to introduce the YubiKey into the mix. This guide is an extension on the “Split-GPG” portion of the guide, but before moving on, complete both “Split-SSH” and “Split-GPG” (See ‘Options’ below on “Split-GPG” first if needed to minimize) before moving on.

I mentioned above that you should do the full guide, start to finish. But, if your goal is to minimize the setup, you can skip a fair amount. You can skip the entire ssh-askpass portions, and anything from Securing Your Private Key on down. 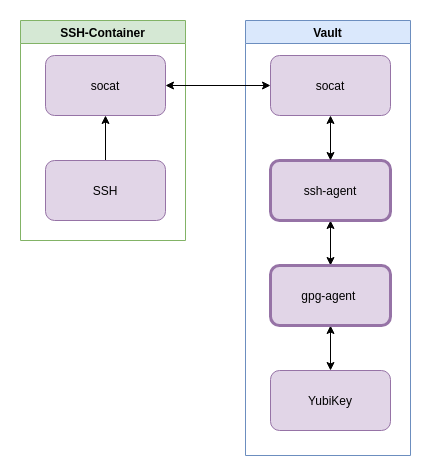 The difference here is the introduction of the gpg-agent and YubiKey portions of the diagram, but this post will focus on the ssh-agent and the gpg-agent since those are the areas we need to work through here.

I want to reiterate that the work in the first two references need to be done before this.

Verification of YubiKey before continuing

Before continuing, verify some of the setup to ensure that things are ready. First, in your vault, verify that the YubiKey is recognized by running:

If you don’t, then the connection between ssh and your gpg agent isn’t running properly. Assuming the steps were done in the guide, and it’s an environment issue, you can add the following to your ~/.bashrc file, reboot, and retest.

Before continuing, one more test may help. Assuming the last test now shows properly, you need to verify that your vault can ssh to a qube. Temporarily connect your vault to the internet, and try to ssh into a host that you previously added your YubiKey (through ssh-add -L) to. This should prompt like normal.

If it doesn’t work, then configure your vault to work with ssh using DrDuh’s YubiKey Guide [3]

Once your Vault can ssh to a node, presenting with a Pin and the like, you’re good to move onto extending “Split-SSH” to cover this use case. Turn off network access to/from this cube

But, there’s a bit more we can do to make this a bit nicer. This will seem a bit strange, as one would expect you can modify the template and hard-code the path, but I found the appVM would reboot continuously if that was done. To work around that issue: 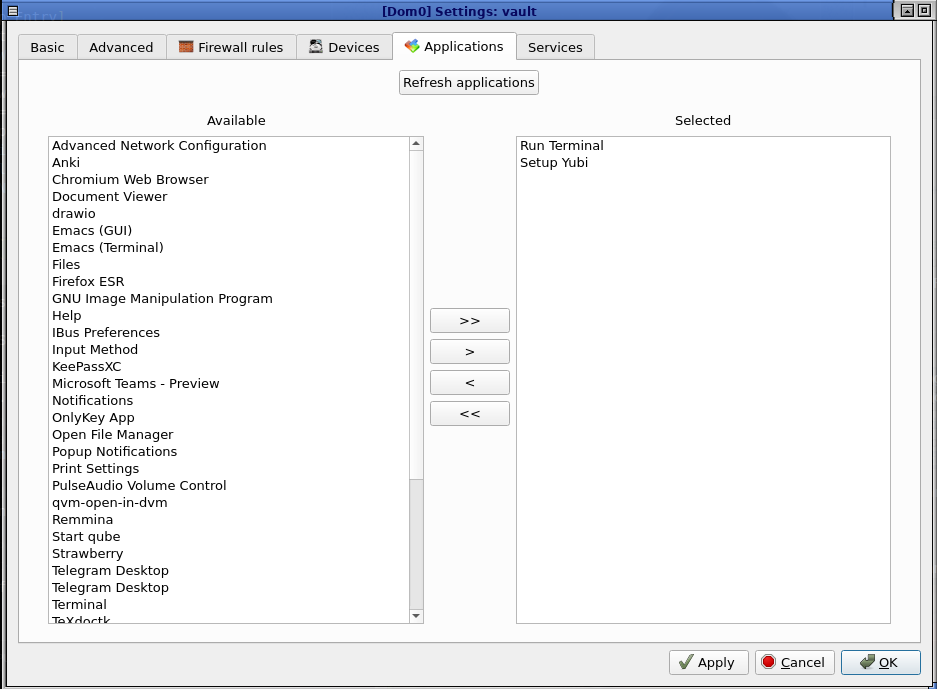 What this does is two fold. First, when we launch the Vault VM (which you can set as automated), it will setup the gpg path as we deal with earlier in this article. This means that the only thing we need to really do at all from here on out is connect the Yubikey, and attach it to the vault VM. If, for whatever reason, this fails then there’s a menu option you can use to relaunch manually as well.

There’s a few things we skipped here that are worth highlighting. Primarily, if you have two YubiKeys, and swap them around a fair amount, then you need to “relearn” the connected key. The script is pretty simple for that, and I’m providing it below. But you can have this as a part of the fixGpg.sh script, another script that fixGpg.sh calls, or whatever.

Another way to solve the above too, is by using a systemctl-based approach, listening to and responding to, the disconnect/connect events. That’s outside the scope of this post, but the script for fixing the attached YubiKey is:

# IntroductionI decided to do a dual book review for this post, as they both are along the same topic and both are fantastic. These are ...… Continue reading