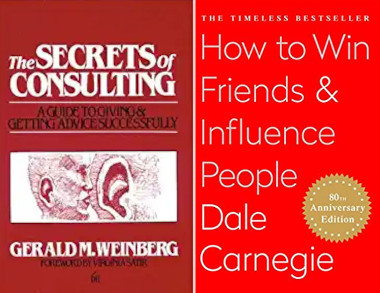 I decided to do a dual book review for this post, as they both are along the same topic and both are fantastic. These are the first soft skills books that I’m reviewing, and it’s been a fascination for me as of late.

One time I was talking with my boss, and he made a comment that I was one of the most “Self-Aware people he’s ever met”. Self-awareness [1] is a very useful skill in life, and I always like to look inward and how I can improve myself.

When I originally took the “Strength’s Finder 2.0” test, I was categorized as being very technical/analytical, but could use improvement on my interpersonal skills. Over the years I focused on more reading non-verbals, than how to build influence. These two books are my start in improving my ability to influence and work with people.

Details - The Secrets of Consulting

I started with “The Secrets of Consulting”, and I found it to be a very good book. The book has 14 chapters that each focus on, often, contradictory rules surrounding a particular objective. Which, this may sound frustrating at first, but it’s really not bad. There’s very rarely that one particular rule will work for every encounter, so understanding and trying different things is important.

These rules, which number 102 (yes, I did count them), in the book are often times humorous and enlightening. One such rule states:

No matter how it looks at first, it’s always a people problem (pg. 5).

In fact, this is my favorite rule out of the book. Being a highly technical person, I often times try and focus on the technical solutions to solve those problems. But, adoption is a challenge. In my experience, people will often try the same thing over and over again expecting different results (e.g. a recent-ish Data Governance implementation), but the book reinforces that it doesn’t work (as well as a basis of insanity [2]):

Whatever the client is doing, advise something else. If what they’ve been doing hasn’t solved the problem, tell them to do something else (pg 41).

The book also reinforces the need to understand the history at an organization, and that things got the way they did for a reason.

Things are the way they are because they got that way (pg. 58).

At the end of the book is a list of recommended readings. The “How to Win Friends and Influence People” was listed as such a book.

I definitely feel this book is good for both consultants as well as employees. Having a “fresh perspective” is very useful, almost as an outsider, who can help ask the right questions to help move the needle - even if it’s only a little bit.

You can find the book on Amazon

Details - How to Win Friends and Influence People

This book was recommended by “The Secrets of Consulting”, and is one of the few books that I purchased 3 copies of. A long time ago, I believe I purchased it on Amazon Kindle, and more recently purchased it on Audible and then again in Hardcover. It’s that good, and really a “game-changer” of sorts.

This book is split into 4 sections, with multiple chapters per section. Each chapter focuses on a specific principle. There’s usually a story about how the principle worked out for someone.

What makes this book so good is not really the advice (as it’s really obvious), but the different perspective in realizing what others want is what we as humans want. A lot of it boils down to recognition, and appreciation. This recognition applies to that other person’s interests and desires.

..after studying human relations, I resolved to change my tactics. I decided to find out what interested this man - what caught his enthusiasm.

The principle for this chapter is:

Other very useful principles include not complaining, not condemning other people, giving appreciation, seeing from other people’s point of views, and so on.

In other words, all this is treating others as how we want (overall) to be treated. In a way this paints humans as kinda vain, but this book really attempts to emphasize not to flatter people, but to really look for the good in people.

My personal lesson for this is the idea of being “Technically correct but totally useless” [3]). And, in fact, this burned me quite a few times. I had one old coworker state “You have to be right, don’t you”, when I went about proving how something was correct. This stuck with me, because he was right that I often times would defend a position because it was the facts that mattered. Unfortunately, to persuade people that was the correct thing was an uphill battle at that point. Even, if it was correct (precision, and course of action). Influence is the art of trying to help guide the other person to the answer, without telling them, and without correcting them. Multiple principles in the book identify where I messed up:

There’s a lot of good in this book.

As you may have noticed, I feel strongly these are incredibly good books. The fact I wrote a review on them probably gave that away, but the easy to digest lessons with the easy reference and stories help the lessons to stick far past reading them.

You can get both books on many sites. If you are interested in the hardcover (which I generally go for, if at all possible), I only found it on Amazon.

Introduction“Temet Nosce” is Latin for “Know Thyself” [1] and is an important philosophical concept [2]. It also appears in “The Matrix”...… Continue reading